Hello cousins. A few new subscribers to the website, and so I thought I’d write up another essay. The family tree continues to grow and with the reunion season upon us, it is great opportunity to again email me with updates at novatony@verizon.net. And as you pop open a brewski at your reunion, think of your German ancestors with their steins who have done the same for generations. Das gut? Das gut!

A long time ago in the Black Forest of Germany, there lived a young “bierbrauer” (beer brewer) named Michael Fehrenbacher (1808-1856). He graduated to become a “kufermeister” which I think means he was a master of keggers. Certainly a good guy to have around. But he left all that and came to America, settling near Loretto, Pa., in about 1848. We don’t know why. In 1856, he dropped dead at the age of 48. We don’t know why. That’s his tombstone in Loretto, but he might not be buried there anymore. He became the grandfather of the steel magnate Charlie Schwab. When the Schwab Mausoleum was established many years later, it included a marble drawer with Michael’s name on it. So, maybe they dug him up for his new home and left the old tombstone standing. But he’s definitely in the Loretto cemetery somewhere.

There is no evidence that Michael revived his German occupation, or that his Farabaugh descendants had a brewery at Loretto. In fact, I grew up in Loretto and it never had any brewery as far as I know. But if you go over to nearby Carrolltown, you will find a significant history of 19th and early 20th century breweries. In his definitive history of the town, more or less disguised as a history of the Benedictine Order, our cousin Fr. Modestus Wirtner recorded that Carrolltown in its heyday had 3 breweries and 11 taverns. That’s a lot of beer for a town of about 1,000. 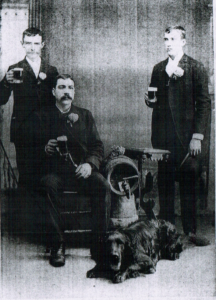 Throughout the 1890s, one of the Carrolltown breweries was owned and operated by Celestine Farabaugh. I just received this photo of him and his product, flanked on the left by his brother Henry, and on the right by his brother Isadore. Celestine added an ice house but had some financial difficulty. After some creditors got a sheriff involved the brewery was bought out by Celestine’s brother-in-law Henry Swope, “in whose hands it was destroyed by fire,” according to Fr. Modestus. The Bearer Hotel was erected on the site. Celestine continued the trade near Pittsburgh, but unfortunately died of tuberculosis in 1910. He left behind a widow with 9 children. Isadore became a brewmaster and chemist for the Allegheny Brewing Company.

John Sylvester Farabaugh worked at a brewery in Spangler, Pa., until it was torn down during the Prohibition. Undaunted, he relocated to Detroit and in 1937 became a brewmaster for Strohs. 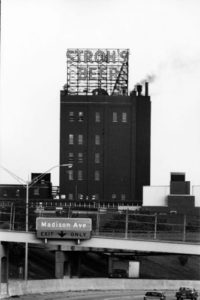 One of my favorite early pioneer names for this area of Cambria County, and perfect for the 4th of July, is George Washington Beers. He was husband to Anna Gibbons (1861-1928) of Chest Springs. Alas, Mr. Beers did not ply the alcohol trade. He and Anna instead decided to seek a different fortune, by moving to California.

2 thoughts on “Farabaughs and Their Beer”