Farabaughs are generally law abiding. But with a family tree that numbers 12,475 and counting, there is bound to be one murderer in the bunch. Thanks to whiz bang search engines and the Pittsburgh Post-Gazette, I found him. 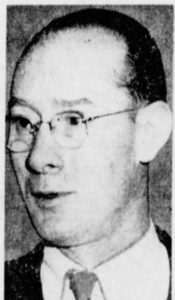 In 1959, James C. Farabaugh shown here was convicted for the 2nd degree murder of his estranged wife, Ella Belle, in Pittsburgh, Pa. James was an out of work painter; he had a past record of charges for robbing confectionary stores in Duquesne, and for selling black market whisky. Ella Belle was described as a 300-pound cripple, who helped to support her husband by selling pencils from a wheelchair. According to the trial testimony, James was living separately in an apartment at 611 Buhl Way. About four weeks before the murder on July 13, 1958, he became acquainted with a railroader named Ray Bowers there. James frequently used Ray’s telephone to call Ella Belle, which led to Ray’s opportunity to meet up with Ella Belle.

On the night of the murder, Ray was having “intimate relations” with Ella Belle at her residence at 1113 Gerst Way, when they heard James pounding on the door. James had been drinking beer, wine and Sterno throughout the day. A companion described him as “out of line with the world.” Ella Belle had Ray exit by a back door. Ella Belle was then found dead from a stab wound to the chest.

James made a peculiar confession to the police. He admitted to stabbing Ella Belle with a 10 inch butcher knife, but had difficulty recalling the events because of his inebriation. His statement indicated that after being stabbed Ella Belle “had a funny look. I put my arms around her and kissed her and then I left. I thought she was playing possum.” James was charged with 1st degree murder, without a death penalty charge. In support of possible premediation, a witness testified to seeing James holding a jar of kerosene over Ella Belle’s head and threatening to set her on fire, a week before the murder. Other evidence of a threat from 3-4 years earlier that was offered by a blind couple was disallowed. During the defense phase, James suddenly accepted a gulity plea to 2nd degree murder, which ended the trial. He was immediately sentenced to 5 to 12 years in the Western Penitentiary. At the sentencing, James’ attorney in pleading for leniency said, “It is unfortunate that a man like Bowers, who ignited the flame which caused the death of Mrs. Farabaugh, is at liberty, while Farabaugh must go to prison.” The judge expressed generic hope that James would someday be rehabilitated into a “useful citizen.”

Since there was no third party witness to the slaying, it is clear that it was James’ confession that led to the conviction. But there were some interesting details. The confession was obtained when James was drunk, and only after the detective involved “had to prompt Farabaugh by calling certain facts to his attention before he could remember the events of the day.” Also, blood was found on the shirt and shoes of Ray Bowers, to which Bowers explained that he snagged his hand on a lock as he left the apartment. Had the case gone to jury, this certainly could have led to a finding of reasonable doubt.

This all took place in a section of the old Northside of Pittsburgh, which was condemned and eventually replaced with the construction of I-279 during the 1980s. Here are the tombstones of this unfortunate couple. As expected, they are not buried together. They lie in different Pittsburgh area cemeteries entirely. I haven’t figured out how long James served time or what he did when he got out. That story is probably not as interesting. 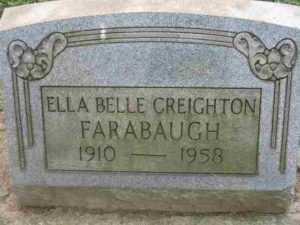 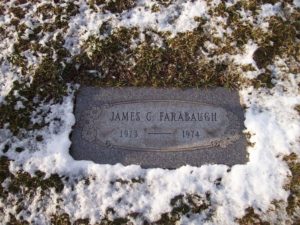