No. 1:  It was a close call, but I chose this for No. 1 because I find the photograph involved to be incredibly haunting and the topic relates to current events. Have a great Halloween and hope you enjoyed this series. Read on.

How did the Edward Farabaugh family get decimated by lung disease? Edward was born on the Atlantic Ocean. It is his baptism by Prince Gallitzin in Loretto that marks the arrival of the Fehrenbachers in Cambria County, to become the Farabaughs. That was on August 25, 1833. The picture below of his family was sent to me by a descendant in Florida not long after I published my book in 1990. It’s a great photo, with 13 of his children gathered around. I can tell by the background tapestry that this was taken by my great-great-grandfather Joseph Farabaugh, who used about four different backgrounds for his many studio photos. If you could collect his work, one would think that all of northern Cambria County lived in only four parlours. 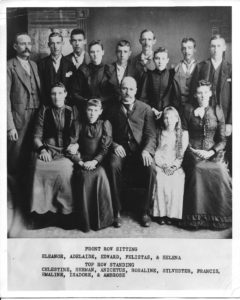 Unfortunately, this family was hit hard by airborne disease. On September 7, 1877, The Cambria Freeman reported that seven family members fell victim to diphtheria, an upper respiratory and throat condition that was a national epidemic at the time. This happened many years before this photo, when the family was living at the pioneer homestead in Allegheny Township. One can imagine that the disease easily spread among the children in close quarters with shared beds. Diphtheria claimed the life of six-year-old Margaret Farabaugh. The worst was yet to come.

Edward’s wife Catherine died in 1890. I believe this picture was taken on the day of her funeral at St. Benedict’s Church, located just across the street from the Joseph Farabaugh Studio. Edward looks mournful. Several of the children look thin and gaunt. In studying this further I learned that the family was dealing with a second, far deadlier airborne disease: tuberculosis. It was also called the consumption because it attacked the lungs directly and slowly “consumed” the body, resulting in weight loss and a pale, gaunt appearance. Local physician Lawrence Flick was among the first to determine that tuberculosis was highly contagious through airborne exposure, like diphtheria. But this understanding came too late for the Edward Farabaugh family. In fact, it took several more years before victims were routinely quarantined. In 1913, a sanitorium opened in nearby Cresson for this purpose. (When I first heard of this as a kid, I thought the sanitorium was a place for the insane, and that Cresson had such a high population of crazy inhabitants that a special place was needed for them. I was partially wrong.).

Returning to our photograph, I was able to figure out that four of the children shown would die of TB, and then came to the chilling realization that they are actually grouped together: 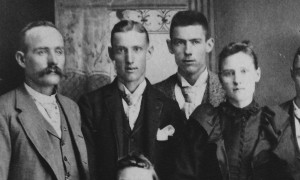 Left to right, we have Celestine, a Carrolltown brewmaster who succumbed to the disease in 1910. Herman died in 1903 at the age of 29. Anicetus was a coachman who died in 1895, at the age of 25. Rosanna (aka Rosaline) died in 1898 at the age of 31, leaving behind 5 young children. From what I have read, TB is usually a latent infection, with a 5-10% chance of becoming an active disease, often many years later. These four Farabaughs are all in the unlucky 5-10%. As young adults, they were not likely to be in constant close proximity as when they were struck with diphtheria as kids. But what we are witnessing here in the photo is a shared breathing zone among the four victims. It remains a mystery which of the members first brought TB to the family, but it could very well be that we are seeing the event that spread it. Believe it or not!