No. 5: There were three Farabaugh brothers who served in the Civil War. The oldest, Charles Farabaugh (1834-1909), is buried in Nicktown and had a significant enlistment, from October of 1863 to August of 1864. Thanks to those whiz bang search engines by the folks at ancestry.com, I isolated his picture taken with grandchildren in 1907 (uploaded by descendant Felisha McKeever):

Second, was Barney Farabaugh (1835-1862). He fought in several battles and contracted typhoid fever while marching through Alexandria, Va. He is buried at the military cemetery there.

Our mystery concerns the fate of the third brother, Anselm Farabaugh (1841-?). Anselm is in the 1860 Census as a 17-year-old laborer living in Ebensburg. He was “mustered in” as they say, in April of 1861, but left service in July of the same year. He was a Private in Company G of the 10th Regiment of Pa. Volunteers and did not see significant action. His life after wartime is not known, except for one tantalizing clue. When Fr. Modestus Wirtner, OSB (1861-1948) compiled a chart of the various Farabaugh families in 1927-8, here is what he listed for this family:

Anselm died at a party in Waterloo, Iowa. How? When? Why? Fr. Modestus gives no details. There are no other clues. He cannot be found in the 1870 Census, so I believe this incident happened between July of 1861 when his enlistment ended and the Summer of 1870 when a census was taken. I just now fired off an email to the Cedar Falls Historical Society. If they don’t come through for me, I don’t know if we’ll ever know. Charles here looks confident, like he has the answer – but he ain’t talking anymore.

Addendum 29 Oct 2014. This mystery is solved. Anselm died from a fall in 1890 and is buried in Waterloo, Iowa. See comment for details. The article and tombstone are reproduced below. 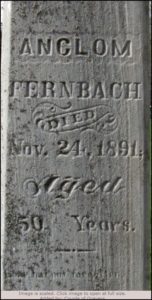 One thought on “Spooky Farabaugh Mystery No. 5: Trouble at Waterloo”