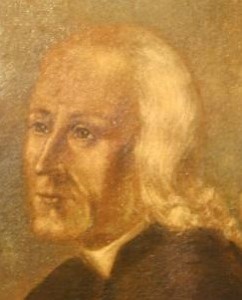 No. 7: Is there a local curse on the name Demetrius? I am a great admirer of Prince Demetrius A. Gallitzin (1770-1840). Here are his three most reliable images. The first two are the only depictions from his life, and the third from about 1873 is the most iconic. He was America’s first Catholic priest ordained with all orders. He heard the call of a dying Protestant woman at McGuire’s Settlement, which led to him coming to the mountains to establish Loretto, my hometown. The first Farabaughs were baptized by him. Working mostly alone and through force of will, he not only established a new church, but a community with various trades. He overcame poor health, poor finances, a difficult congregation and a 1807 Petition to have him removed (a salacious document that was never transcribed and disappeared in the 1940s). I’ve read six of his biographies, and there are still discoveries being made following his death in 1840. He may have turned down offers to become a bishop in St. Louis and New Orleans, and today there is an effort to have him canonized. He was brilliant, determined, highly educated, enigmatic, played the violin and was (to quote my mother) “independently holy.” He was the “Apostle of the Alleghenies,” “Prince Among Priests,” and “The Prince Who Gave His Gold Away.” Well, his gold was actually taken from him involuntarily, but that’s another story.

Naturally, some of the pioneer families began naming their children after him. However, I noticed a trend that these children did not fare well. Searching through my whiz bang database, there are only two attempts in the Farabaugh line:

This does not really build a case for a curse. But here are several other untimely, local fatalities: 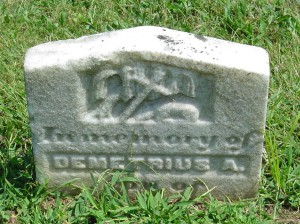 Demetrius Augustine not-so-Luckett (1824-1850) had a spectacular death. He was at the home of Mrs. Ignatius Adams in Summit (i.e. top of Cresson, known mostly today as a speed trap for the unwary motorist), where a German known only as Mr. Hoover was keeping 12 kegs of gun powder. Mr. Hoover supposedly lit a candle. When he blew it out a spark escaped and caused a massive explosion.  (Mountain Sentinel, Ebensburg, 14 Feb 1850, “Awful Calamity”).

These are just the early deaths that I happen to notice and had in my limited, but whiz bang, database. There may be others. Now, this is not to say that there haven’t been Demetriuses (?) who had long and prosperous lives. Demetrius Augustine Strittmatter (1833-1916) had nine children and lived to be 82. But if you eyeball this, we are way, way past normal infant mortality rates and close to, well, a curse. Or maybe it’s just that the fates don’t want to dilute the legacy of our beloved founder. I will say that when my wife and I debated names for our son 12 years ago, I quietly crossed Demetrius off the list.