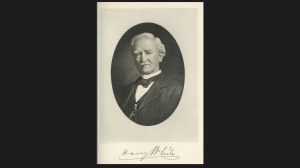 Mary Farabaugh (1880-1898) had a profoundly disturbing, short and tragic life. At the age of eleven, she was a rape victim in Pine Township, Indiana County, Pa. Charges were pressed against 24-year-old Lawrence McClemens, a grand jury indicted him, and the matter proceeded to jury trial on June 22, 1892. Judge Harry White, pictured above and son of the namesake for White Township, presided. Here is the account of how this brave girl testified against her attacker:

Commonwealth vs. Lawrence McClements: 1st count, rape of a woman child under 16 years of age; 2nd count, same; 3rd count, assault with intent to rape; 4th count, same. Mary Farabaugh, prosecutrix. The prosecutrix testified:—I live in Pine township; was eleven years old the 19th of last July; father’s name is Albert Farabaugh; am the oldest of the family; on the 19th or 20th of April last, I took some eggs to Guthrie’s store at Possums Glory, Pine township, to get some coffee; live about two miles from the store; the road has woods on one side, and goes through woods part of the way. Mrs. John Davis kept the store that day. I noticed Lawrence McClemens, the defendant, on the porch of the store when I went in, but did not see him when I come out. About a mile away from the store, McClemens caught me around the neck; he either came out of the woods or came up behind, I don’t know which, did not see him before he caught me; he pulled me off the road and threw me down among the bushes alongside tbe road, and accomplished his purpose. I screamed and hollowed. Fry Roser came along in his wagon from the store, and McClemens slapped his hands across my mouth so I could not scream. I had been down a good spell before Fry Roser came along. Roser drove past a piece and [stopped], then McClemens run down into the woods. When I went home I did not tell mother about it, because I didn’t like to. The prosecutrix was corroberated In every particular, several witnesses testifying that the defendant asked them to settle the matter with the child’s father. The parents did not discover anything until May 9th, when the defendant sent a man to them to settle, and on the following day they had him arrested. They noticed the girl had been crying when she came home, but she said nothing was the matter, and a couple of weeks afterwards, the mother discovered the soiled clothing in the washing. The defendant is about 25 years of age. The defence claimed that McClemens got sick when about 12 years of age, which left him entirely deaf and injured his mind. Beyond the fact that he talked fast and acted queer, no evidence of insanity was produced. The jury were out about 20 minutes. They found the defendant, McClemens, guilty of rape under the 1st and 2nd counts of the indictment.

Lawrence briefly escaped on the day of sentencing, during the transfer from the jail to the Indiana Co. Courthouse. He fled as Deputy Budd Lewis turned to lock the jailhouse door. He “struck out like a fine fellow down Sixth Street,” but was apprehended by the Sheriff near Clawson House. Lawrence was then sentenced by Pres. Judge Harry White to the Western Penitentiary for separate or solitary confinement at labor for ten years without credit for time served (the maximum term was 12 years). He was ordered to pay a $100 fine and the costs of prosecution. Because the case attracted much local attention, the sentence was published in the local paper at great length, verbatim. Lawrence indicated the trial was unfair because he could not hear the testimony, but also unwittingly admitted that he spoke to some of the witnesses about settling. Judge White summarized the testimony. “You seemed to be entirely oblivious of the infamy of your crime for you merely went ‘round the neighborhood hunting for the parents of the girl with whom you had trouble trying to condone or compromise it for the sum of two dollars. Is it possible a man of your age. . .does not know that this is one of the most heinous offences known in our criminal jurisprudence.”  Judge White also rejected a mitigation argument claiming intoxication, since there was no evidence of it on the day of the crime, and also arguments about “weakness of intellect.” There was no indication that Lawence was represented by counsel at the sentencing.

In August of 1898, six years later, it was reported that Mary was convalescing from a few days of illness. The following week, however, a Miss Lettie Mulvehill was assisting at the Farabaugh home in Pineton while Mrs. Farabaugh waited upon Mary, who was very ill with inflammation of the brain. In September, her death was reported “of brain trouble.” Her obituary made no mention of the past ordeal and recounted that “[s]he was a bright and intelligent young lady and assisted her father in his duties at the postoffice. . . Mr. and Mrs. Farabaugh desire to thank the neighbors in Pineton and vicinity for their kindness during the illness of their daughter.”

At the time, the terms brain trouble and brain fever could refer to meningitis, but was more commonly used to describe mental instability or trauma which, given the circumstances, seem to connect her death with the terrible incident years before.

Lawrence McClemens was listed among 14 inmates at the Western Penitentary in 1900. He apparently served the full sentence. He resurfaces in the 1910 Census. He is listed as a 39 year old deaf laborer doing odd jobs, living alone on Indiana Pike in Blacklick Township, Indiana County. In 1917, he sold rights to three tracts of land to the Yellow Creek Coal Co., for the sum of $287.15. After that, he is not found in any census records or obvious sources.

This is certainly one of the most disturbing stories I uncovered by word searching newspaper archives. It is not likely we will locate a picture of this courageous girl. The trial account seems so coldly factual and disquieting. Someday, I would at least like to get a picture of her tombstone at the Catholic cemetery in Cameron’s Bottom, if it can be found.