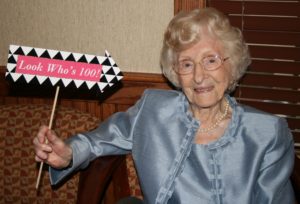 Last Saturday, Hilda Farabaugh Buck celebrated her 100th birthday. She has a special place in the family history, because she is the last living grandchild of a Farabaugh immigrant, and the last to have lived at the first settlement. Her mind is quite sharp and with the help of her son Dave over the course of a few interviews we have been able to get a sense of what life was like there, from the time immigrants Augustine and Mary Farabaugh established the home in 1840, to when Hilda left it in 1935. 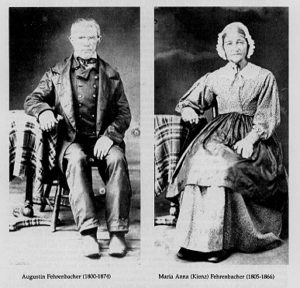 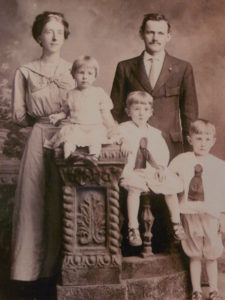 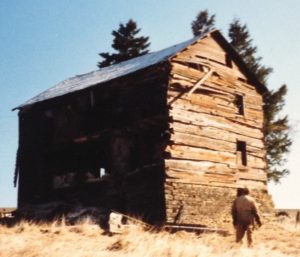 This photo of the ancestral home was taken in 1988, more than 20 years after it was last occupied. Hilda confirms that it resembles her childhood home, which by the time of this photo had fallen into its ramshackle, but still sturdy, state. It looks stark and foreboding. But as explained below, Hilda has clear memories of it in fact being quite a lively and joyful home, filled with children and headed by their hard-working and dedicated parents. It was located near Bradley Junction in Allegheny Township, Cambria Co., Pa. From the old “Brick Road” below, the farmland is accessed by an unmarked lane (now known as Beck Road) that opens to the left to another lane that leads directly to the site of the original homestead and pond. The land is spectacular, especially in the Fall. The tract at one time grew to 200 acres, and alternates from dense woods to squarely defined clearings that are now matted green grasses in the Spring and dry yellow in the Summer. If you were to visit it today, you can witness much of what Hilda and the immigrants experienced: green forests, the gently sloping fields set against powder blue skies, bird songs and the sound of winds through trees uninterrupted by humanity. The iconic images of the settlers Augustine and Mary come to mind when one stands in the middle of this sprawling property, and the imagination puts them in motion. This is the land that was painstakingly cleared of timber and then laboriously farmed for over a hundred years. It is the ancestral home to over 8,000 Farabaugh descendants today. 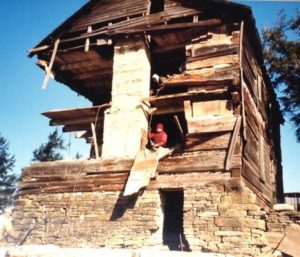 Hilda was born here on July 22, 1917, as the 7th of 11 children to Ed and Mary (Baker) Farabaugh. In the cross-sectioned image, the worker in red is sitting in the window frame for the first floor parlor. That room was reserved for house guests. It had a black leather couch, a family photo album now lost to time, plants, ferns by the window, and a place for the Christmas tree.

The most remarkable feature in this image is the above ground stone foundation. In 1840 it was laid by the settler Augustine, who was an accomplished stone mason by trade. It is made of individual rocks that were hand-chiseled to fit together, without the benefit of mortar. Hilda recalls that the foundation served as a multi-use cellar. A furnace to heat the home was installed there in the later years, and the large white stack next to the worker in red likely distributed the heat from it. The wood plank structure also likely dates to the 1840 construction, as even at that early date the area had planing mills that operated for the purpose of erecting such homes and their barns. On the right, and barely visible, is a bright white, circular grist mill stone, laying horizontal at the base of the home. It marks the front of the house and used to serve as a step to the front porch leading to the front door. The porch, and a two story addition that once was adjacent to it, were previously demolished and are missing from the photo. The millstone is still at the property. It is now set vertically in the ground as a sort of monument, in view of the approach from the lane.

The dining room was off to the right of the front door entry, and doubled as the family room. The large oak table there  had at least 8 chairs and there was a big couch and a side board for dishes. Hilda recalls a beautiful, large pale green lamp with painted roses. The children did homework on the table at night. Hilda recalls ghost stories being told there. All of the courting took place in this room. “My sister Thelma was popular,” deadpans Hilda.

Further in on the first floor was the kitchen. Hilda says it was by far the busiest area of the home. It had a black, wood-primed coal stove with a silver top. It was the home’s heating source until the furnace was put in. Opposite the stove was the kitchen sink. Water was supplied to it by a gravity-fed pipe that led from the uphill well and cistern. There was a narrow area for a pantry, and a washtub for baths. Clothes were also washed there in the tub until they acquired a gas-powered washing machine that was placed on the porch. An ice box was added in later years when they acquired electricity (and party line telephone). Before that, cracked ice from Chest Creek was kept in sawdust in the ice house down the hill. Hilda has a favorite memory of her industrious mother making cakes in that kitchen. All food preparation came from the various crops they raised, and there was steady activity in and out of the kitchen door, which in the cross-section photo would be on the opposite side of the house. The two cows were milked in the mornings, and the milk separated to churn for butter and buttermilk; eggs were collected from the hens; the central crop of potatoes was fried or mashed for consumption; they made bread from the flour and sugar father Ed would barter locally; the vegetable garden provided peas and carrots; and there was a pear tree off the front porch with cherry trees nearby. They would purchase barrels of peaches. Most farming was done by plow with two horses. They planted winter wheat, as a cover crop to maintain good topsoil. Food was frequently canned for the WInter. In the kitchen, father Ed would lead the rosary every night – with the family on its knees and leaning against the chairs. Hilda recalls that he sometimes was so exhausted from the day’s work, he would nod off during his own recitation.

From the front door entry, a stairway used to lead down to the cellar, but this was then configured to go up to the second story. At the top of those stairs was a landing where the wardrobe was kept, which Hilda found frightening as a child. The second story hall accessed two bedroom and then doubled back to two more, ending and the foot of the attic stairs, where there was a table with a globe light and a statue of the Sacred Heart of Jesus. 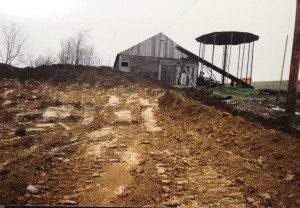 Hilda vividly recalls radio programs, and FDR saying “Friends, you are all my friends,” in his popular fireside chats. Mother Mary was very creative with fabric, and she made by hand most of the curtains, furniture slip covers and clothes for the children. They never went to the doctor, except for vaccinations. Nearby Bradley Junction had the local post office, but because they were miles removed from the towns, they never had indoor plumbing or septic. There were outhouses at a distance down the hill and Father Ed usually emptied all of the chamberpots. Hilda never minded the outhouses, “because Mrs. Eisenhower had one.” For music, there was a Victrola that played the old 78s. Hilda recalls seeing Guy Lombardo at the Sunset Ballroom, where she and sister Celeste would learn dance steps, feet on feet. Although the Bishop Schoolhouse was available for the children’s education just up the hill from the farm, they instead took a bus to the Catholic School next to Michael’s Church in Loretto. The family also attended Mass there on Sundays, driving in with the Model A. Nights were generally quiet, and Hilda recalls falling asleep to the cows mooing in the barn, shown here.

While the Summers were full of fun and full of life, Hilda recalls that the Winters were quite harsh, especially the infamous area Winter of 1936, which produced such a melting run off in Spring that it contributed to one of the Johnstown floods that year. With the farming operation on hold, Ed would take Winter employment at the railroad. Hilda recalls that although they lived life to the fullest on the farm, it was hard work – they had a fair share of both good and bad times.

Hilda left the home at the age of 18 and worked various local jobs. She lived for a time at the home of Bede and Naomi Farabaugh Bender in Carrolltown. She met Cy Buck, a native of nearby Cresson, and they married at St. Michael’s Church in Loretto, in 1943. Cy worked for Seagram’s Company and they settled in Lawrenceburg, Ind. He passed away in 2000 and Hilda remains active despite her advanced age. Hilda recognizes that her childhood was from a vastly different, bygone era of subsistence farming, marked by often harsh Pennsylvania winters. Hilda’s comment: “We were cold but didn’t know it.”

The property was sold to “Easy Ed” Smithbower in the 1950s or 60s. In 1988, it was acquired by the O’Brien family that moved into the area and ambitiously built a magnificent home with side residence. Aware and interested in the history of the property, son Ed O’Brien had all of the pictures shown here taken at the time of demolition. Ed confirms, with admiration, the intricate pattern of Augustine’s old stone foundation, which he utilized for his own construction. He also used the original bull-strong floor joists shown below, which can be seen as overhead support at his property today. 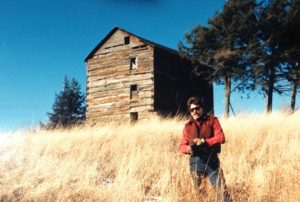 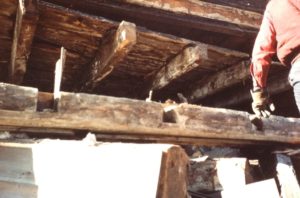 Removal of the wood beams for the new home

Hilda maintains the charm of her era, and speaks in a very clear and humble manner. At her 100th, a video captured her personal recounting of all of the world changes she witnessed, from telephones and automobiles to a man on the moon to smart phones. It certainly seems that her generation has witnessed the greatest rate of change, and she serves as a living link from rural America’s agrarian society to our modern age of technology. Given her amazing lucidity, it would not be surprising to see her surpass the family record for longevity, which currently stands at 104.

(For those interested in more of the old Farabaugh farm history, see the prior essays, Finally a Visit To the Homestead and The Second “Kirsch” Farm.) 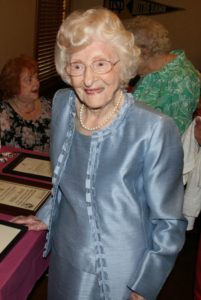 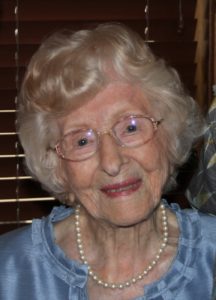 2 thoughts on “Hilda at a Hundred”