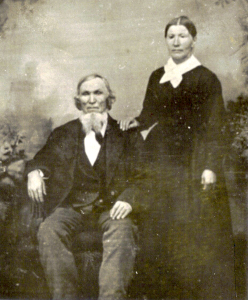 No. 3:  Sometime in the mid 1980s, I was able to spend a few days with the vital records at St. Benedict’s Church in Carrolltown, Pa. They record in Latin the birth of three boys to the immigrants George and Elizabeth Farabaugh. First was  “Joannem Fahrebach, son of Georgii Fahrenbach and Elizabethae Biller.” The birth date is July 3, 1854. This is followed in the records by Francis Joseph, born in 1855, and Anthony in 1856. All three boys have their baptisms recorded at the church within days or weeks of the birth dates, with witnesses in attendance.

They vanished — all 3 of them. They don’t show in the 1860 Census. There are no death or burial records. When I was preparing the Farabaugh book for publication in 1990, all descendants expressed surprise that these boys existed, including Cecelia Farabaugh, who wrote her own publication on the family and lives on the original homestead. She thinks they must have died young and are buried at St. Benedict Church. This would make sense, because George and Elizabeth had strong ties there. In 1851, George pledged $10 for the ten acres needed for the building and cemetery. On January 19, 1852, they were married in that church.

However, the church recorded deaths and burials and I didn’t see any of these boys in those records. Neither did Fr. Albert Ledoux, who later transcribed the deaths and burials. He listed several deaths of both infants and adults, but not these three: 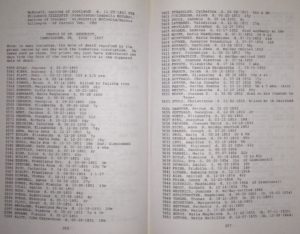 While it is possible that a burial could have been overlooked by the priests who drafted the entries, it is not plausible that all three children were victims of clerical errors. One theory is that with the church and grounds being new, the cemetery wasn’t being used yet. This doesn’t explain the lack of burial records and doesn’t really pan out. Here is an example of a tombstone there that pre-dates the birth of the three boys. I believe the church maintained a plot map, but I doubt it will list the missing boys.

Since George pledged money for the ten acre church and cemetery in 1851, why not have the boys buried on the consecrated ground there? Perhaps the family used another church cemetery. However, there is no proof of them at St. Joseph’s, the local mission church, or St. Michael’s Church in Loretto. George and Elizabeth always belonged to St. Benedict’s in Carrolltown. When another boy, Sylvester, later died at the age of 11 years, there was a funeral and burial at St. Benedict’s, and he has a tombstone there today. George and Elizabeth were also buried there themselves.

Perhaps it was decided to simply bury them on the family farm. But descendant Cecelia indicates there is no evidence of graves there. Or, because there is actually no evidence of their deaths, maybe they were actually raised by others. An intriguing thought. To me, the most puzzling aspect of this mystery is that the descendants never heard of them. If we didn’t have the baptismal records, we would never know that they existed!