I have to admit, when I first saw mention of The Farabaugh Prize on the interwebs, I thought, “Cool! What county fair was that?” But I soon realized that this is an academic award, given annually to a top graduate at Notre Dame Law School. I was embarassed by my presumption. 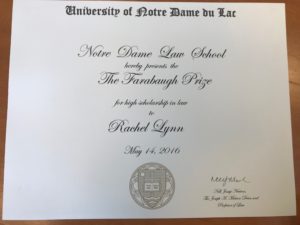 The story of The Farabaugh Prize begins with the early death of Elizabeth Noel Farabaugh (1842-1884). She left behind a cantankerous husband, Matthias, and eight children ranging in ages 17 years to 10 months. Matthias was no caregiver. He was a tough-as-nails subsistence farmer and wagon maker in Munster Township, just outside of Loretto, Pa. We know something of his character because of an interview of his grandson Wilfred Sutton, who explained that Matthias had a long, dirty white beard, that the grandchildren were very much afraid of him, that he was forever bitter over the loss of Elizabeth, and that he left nothing in his Will for his daughters. I didn’t know quite what to think of Wilfred’s testimony until years later when I found a corroborating picture of Matthias, below. You can form your own opinion but I for one would not want to ever trespass on his property. 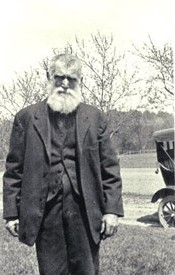 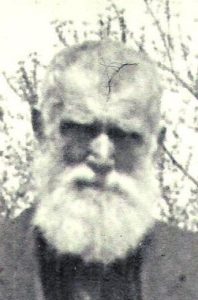 Matthias had other reasons to be unhappy. In 1866, the family returned from Mass one day to find that the house burned down. They lost everything: the furniture, the workshop, the tools and the lumber that belonged to Matthias’ brother Isadore. Matthias had to hastily erect a shack for shelter. The home was near the tracks for the Ebensburg-Cresson line and there was speculation that sparks from a locomotive caused the blaze. The newspaper account vaguely indicated that “it was the work of an incendiary.”

After Elizabeth died, her elderly parents took in the 4 daughters and became their legal guardians. The 4 boys evidently remained on the farm, except for the youngest, Gallitzen Aloysius Farabaugh (1883-1961). Anyone with a connection to the area knows that the name is a nod to the local pioneer-priest Demetrius “Prince” Gallitzin who reigned supreme from 1799 to 1840. Several boys were named Demetrius in his honor. They generally did not fare well, as I light-heartedly explained in Spooky Farabaugh Mystery No. 7. 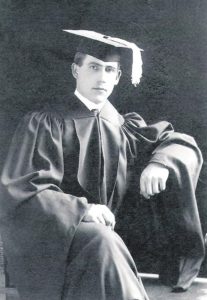 When Gallitzen was 6 or 7, his uncle Fr. Francis Noel may have sensed promise in the boy. He took him to live at his rectory in Chambersburg, Pa., also occupied by a spinster aunt, Clarinda. There, Gallitzen was likely educated by local nuns until the age of 17, when Fr. Noel somehow managed to enroll the boy at Notre Dame in South Bend. Fr. Noel paid for the first year’s tuition and sent him off with 4 dollars, accompanied by Clarinda.

Against all odds, Gallitzen thrived at Notre Dame. Often known as “G.A.,” he excelled at oratory and became a star baseball player. He went to Georgetown law school, played a season of minor league baseball in Ohio, and then returned to South Bend in 1907, embarking on a brilliant career as an attorney, judge and scholarly author. Throughout the 1920s, he was one of the premier jurists of Indiana. G.A. returned to Notre Dame Law School as a professor, and served on a finance committee to erect a new stadium with legendary football coach Knute Rockne. In the four years he served as city judge, he heard 5,872 cases. Here is G.A.’s graduation photo, resplendent in his robes.

Working out of the historic J.M.S. Building in South Bend, G.A. had a diverse civil practice that included sports-related litigation. Perhaps his most fascinating case was one that he lost. On 1926, he represented promoters for the black heavyweight Harry Wills, champion of the Colored Division, for the Chicago Coliseum. Wills was committed to fight the renowned white champion Jack Dempsey, a fight which looked to break the color barrier in championship boxing for good. Dempsey’s promoter reneged, and instead arranged for Dempsey to fight Gene Tunney, who was also white. A multi-state scramble ensued. When the Dempsey-Tunney fight was set in Philadelphia, G.A. rushed there to stop it, and was interviewed while switching trains in Pittsburgh. G.A. disclosed to the press that he had possession of the contract for Dempsey to fight Wills, that he was going to ask the Pa. Boxing Commission for intervention and then, if necessary, petition the courts for an injunction. 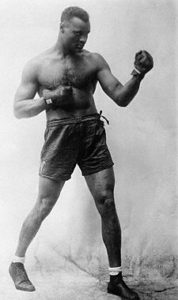 He failed. Philadelphia was counting on the fight as part of its Sesquicentennial celebration and the courts were not going to intervene. Harry Wills never got his title shot. His career sadly languished for a year and he could never regain his fighting form. He did, however, wisely invest his modest winnings and did well in real estate. Boxing fanatics still argue over who would have won that fight, and there’s even a brief, speculative YouTube animation.

In the following year, 1927, Notre Dame began awarding the Farabaugh Prize, “for high scholarship in law.” I wasn’t sure if it was a medal, plaque or cash. So I went back on the interwebs and found the 2016 winner, Rachel Lynn. She assured me there was no cash and texted me an image of her award. The law school at Notre Dame graduates about 200 students, and the Farabaugh Prize only goes to one of the top 3. It’s quite an accomplishment. In the excitement, her family declared that “Rachel won graduation.” Indeed. Rachel is now an associate at the firm of Snell & Wilmer, in Denver, CO. 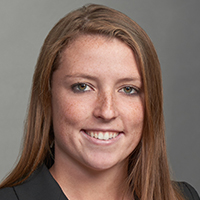 8 thoughts on “The Farabaugh Prize”