There are two ways to get to Carrolltown from Loretto. First is the “Dutch Road,” nicely paved, with the stone castle reservoir built by Charlie Schwab as you leave town, open vistas of rolling farmland, and a roly-poly romp towards the end. Second is the more intriguing “Brick Road.” Much of it plunged you right into the dark woods, red brick by red brick, with many treacherous potholes, even after it was slowly paved over in the late 1960s. There was a very spooky mansion on the hill overlooking Bradley Junction – sometimes occupied and sometimes not. We were never quite sure who or what was in there. My Dad used both roads equally, but it is the Brick Road that takes you to the sites of the four original Farabaugh farms. And here they are (click image to enlarge). . . 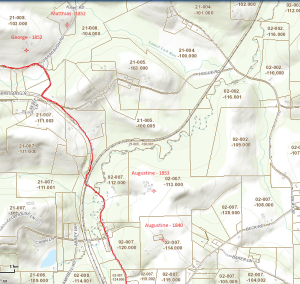 The first home was the 1840 settlement of Augustine and Mary Fehrenbacher/Farabaugh, which was the subject of my earlier post (“Finally, a Visit to the Homestead”). Here, I want to address the similar home built downhill when the adjacent land was purchased in 1853, bringing the homestead tract up to 100 acres total. This home was built for the family of their son Erhard (aka Erhart) and his wife Annie Eckenrode, who also married in 1853. The unmarked access road is just past Bradley Junction. 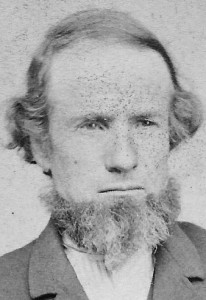 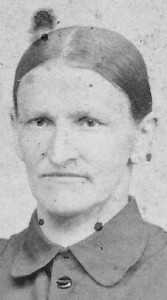 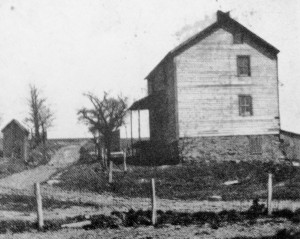 This is the only image I have of the original home, undated, given to me by Mary Mangus and enlarged here.  It was built by Augustine and his sons, and the chiselled stone foundation is evident.  The fifteen children of Erhard and Annie were born and raised here. I have a few anecdotal references to it. Notably, Cecil Farabaugh related to me that in 1892 when Erhard was “63 years old [he] got sick, he climbed up the hill [to his home], opened the door and fell in on the floor dead, in warm weather.” (Erhard’s probate file differs by indicating he survived long enough to make a deathbed Will that gave all possessions to Annie).  Also, Dr. Charles Farabaugh wrote:

“As a child of about six [in 1894] I had lived for a short time in the household of my grandmother [Annie Farabaugh]. I well remember the living room, especially with its grandfather’s clock tick-tocking away as grandmother led the family rosary every night – and the smooth lawn by the kitchen door where she plucked seed spikes of the broad-leafed plantain weeds as feed for her canary; the outdoor brick bake oven that stood between the house and the fenced lane.”

According to the 1900 Census, Annie was living at the Allegheny Township home with her  widower son Henry and his 3 year old daughter Catherine. Also living there was a 14 year old “servant” Anna Adams, who was actually a granddaughter. 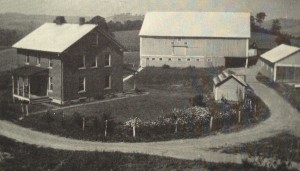 Following Annie’s death in 1906, the parcel was overtaken by one of the younger children, Jim. Jim greatly expanded the site, as evidenced by the 1918 photo above. This set of buildings excludes the original home, which would be up and to the right.

Lucy Mock, James’ granddaughter lived on this farm from her birth in 1929 to about 1950. Lucy explained to me that as a child the original home was abandoned and used as a playhouse. 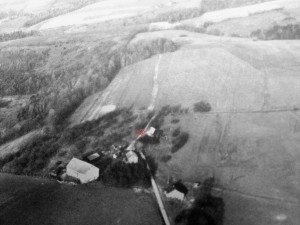 This aerial view of the jim Farabaugh farm from about 1950 shows that the original home (marked by the red arrow) was still standing and was now surrounded by a grove of trees. The original 1840 hilltop settlement is up the hill and to the right, out of view. Jim died in 1958, and the farm was resumed by his daughter Minnie and her husband Ed Kirsch. It has been known as the Kirsch Farm until very recently when it was sold to Daniel and Mary Jane Rieg. 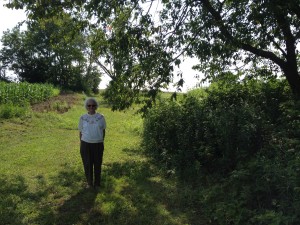 On August 4, 2014, Lucy Mock poses in the lane where the entrance to the original Erhard Farabaugh homestead once existed on the right. A grove of trees obscures the foundation. In her youth, she used to regularly walk up the road behind her and over to the right past the original Augustine homestead and on up to the Bishop School House, the remains of which are at the top of hill along what is now Beck Road.

Incidentally, this area is surrounded by at least a dozen later farms and homes that are occupied today by various Farabaugh relatives. To explore these tracts, you can visit the GIS Cambria County site to learn more. They reflect the expansion by the subsequent generations, following the original four settlements. 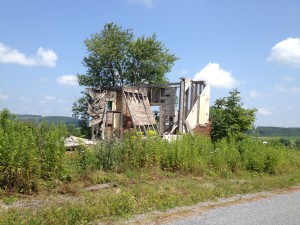 Remains of the Bishop School House, 2014