Standing on the spot of an ancestral home is somehow humbling. It hopes to explain who you are and how you got here. Although I wrote a book on the Farabaughs and complied a detailed history of the family, capturing images of the homestead and walking the farmland somehow eluded me until August 4, 2014. With the help of perhaps the only relative with a memory of living on the tract, Lucy Mock, and the current owner Ed O’Brien, here is what I learned.

Augustin and Mary Fehrenbacher came to Cambria County in 1833, and they settled at their home in Allegheny Township in the year 1840. We are able to pinpoint the year because the property deed is dated January 7, 1840. Although they were living on another parcel they owned in Susquehanna Township where their son Anthony was born in the Spring, they relocated to their newly-acquired parcel in Allegheny Township as reflected in the Census taken later that year. Here are images from 1988 of that stark home, which was situated within the cleared and sloping landscape of the farm until it was demolished in the following year. . . 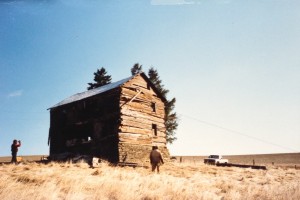 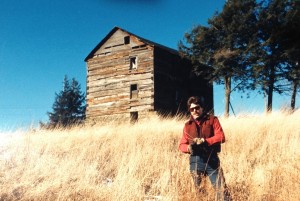 This is Ed O’Brien, current owner of the original homestead. Ed used much of the stone and wood beams to build two beautiful homes for his family. This original home was occupied by Augustin and Mary until they moved to Carrolltown around 1858. Their son Edward married that year and raised a large family here – a family that was greatly affected by diptheria and tuberculosis – remaining until 1888. The home was then acquired by Edward’s nephew James before becoming the home and farm of another nephew, Edward Giles Farabaugh, for several decades. The tract fell out of family ownership when it was sold to “Easy Ed” Smithbower in the mid to late 20th Century, transferred to George Smithbower (whereupon it was no longer occupied but used to house pigs), and finally purchased by Ed O’Brien in 1988. Preparing the home for demolition, this cross-section shows the foundation and cellar that demonstrate the stone masonry skill of Augustin. These stones were individually chiselled to fit without mortar. Ed O’Brien explained to me that the first story chimney with flue was made of clay with horse-hair glue, shown here, with Mr. Driskel on the first floor. An interior staircase led to the second floor that likely had three bedrooms. And then there was an attic. What we don’t know is how the lumber was prepared. The area had various saw (or “planing”) mills but which ones were in operation in 1840 are unknown to me. At right is the entrance with a white grist mill stone; further in the distance is the barn, which dates later than the original home. 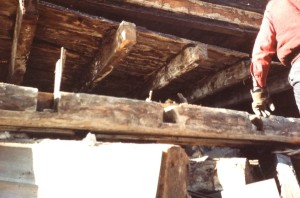 Large floor joists that account for the home’s durability and are were reused for Ed’s current residences. 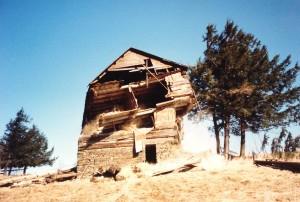 This image captures the moment of demolition in 1989. 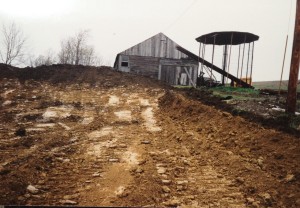 With the home cleared away, the barn became the next casualty . . .

I asked Ed if he found any original artifacts during the demolition. He told me the original stone sink was in place on the first floor, which was gravity fed from above the house where he found an approximately 60 foot water well toward the area where the barn stood (Ed dug a much deeper well next to it). Ed located a sistern near the barn. The home never had running water and likely had an outhouse nearby. Ed removed the stone sink and the stone drainage, and placed it as a birdbath next to his smaller home on the property. Ed and I strongly believe these must have been chiselled by Augustin, because they were integral to the original home. 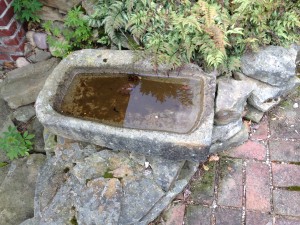 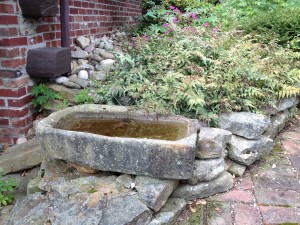 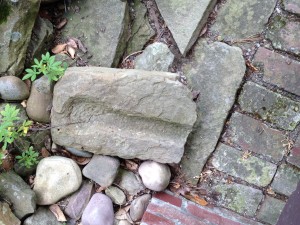 Below are the original stone steps leading into the homestead, which were not moved. I should have moved the metal pieces and had Ed or Lucy taken my picture. The original home is now a grassy front lawn behind which Ed built the current home. I really should have taken more pictures of the current parcel. Ed has extensive gardens and has a keen sense of design that utilized much of the original character of the settlement. I first met him in 1990 when the homes were newly completed and was aware that he took “before and after” pictures. It amazes me that no photos of this place surfaced during the years I lived in Loretto, and that no relative told me it was still there. 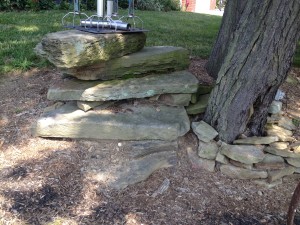 I will soon do another post that explains the second, nearly identical, homestead down the hill from this and the associated memories of Lucy Mock.