This remarkable photograph was taken on August 15, 1929, in front of St. Michael’s Church, Loretto, Pa. A second image follows, edited with a number key for identification. It was taken by Michael J. Farabaugh (1878-1959), on a Thursday, the Feast of the Assumption for the Blessed Virgin Mary.

Archived and presented for website by Mark J. Farabaugh – 2014

Back row, standing, left to right:

* Identified by Vera (Gilbert) Madigan per letter of Oct 1995.

**** Identified by Scott Martin Schaffer per email of 16 Nov 2015, relying upon memory of his brother Thomas.

***** Identified by Catherine Farabaugh (of Leo) per electronic communication of 23 Dec 2016.

DESCRIPTION OF THE CAMERA

I was present at a photo session at another location when I was about nine years old (1941). Here’s my recollection of the event:

I was always a curious kinda guy, and “Grandpap” always took the time to answer my questions. I don’t remember the location, but I watched him mount the camera on a very heavy tripod just next to the pitcher’s mound at a baseball field. I was happy when he said I could stay with him next to the camera while he was taking the picture. The camera was a large box made of wood and painted dull black. All 3 dimensions were about 13 inches. I remember him adjusting the legs on the tripod to get it level. In retrospect, I think the camera must have weighed 30 pounds or more, and was turned by a heavy spring-wound “clockwork” motor, controlled by an escapement, on a rigid mount supported by good set of ball bearings.

He spent two or three minutes arranging the subjects in a large circle (my guess: 30-35 feet from the camera). I can now say that he was not only an expert photographer, but also a pretty good “people shuffler.” It wasn’t a complete circle – perhaps only 200 degrees. They were about “2- or 3-deep” with the shorter ones in front. Next, he rotated a crank on the side of the camera several turns. He explained that he was winding it up “to make it turn into a merry-go-round.” He explained further that the camera would be turning slowly so it can “see” everyone in the circle. When I nodded my understanding, he really confused me by saying the camera turned, but the film inside didn’t move. I really don’t know why I pretended to understand.

Finally, he announced that he was ready to take the picture, and asked everyone to look right at the camera as it turned. He then pushed a button, and the camera rotated slowly. I’m guessing that it probably took about 30 seconds (twice as fast as the second hand on your old-fashioned analog wristwatch).

I always enjoyed visiting his studio, just across the street from the church. A week or so later he explained how the camera worked. He showed me how he would cut a section of unexposed film (covered on both sides with black paper) to the right length, so that it formed a circle (really a cylinder) to fit inside the camera. He said the motor that slowly turned the camera in one direction also turned the film at the same speed in the opposite direction – “the camera moves but the film doesn’t.” He explained further that the light goes through a narrow slit on the front of the camera to expose the film.

At that age, I didn’t totally understand his explanations, but I now know that the narrow slit functioned the same as a tiny hole in a pinhole camera (If you are too young to remember these, google “pinhole camera” in your browser). The only ways he might have been able to control exposure would either be by changing the width of the narrow slit, or by changing the rotation speed. I really don’t know if either was a feature of the camera. I didn’t witness the print-making process, but I assume it was a “contact print” rather than made by an enlarger.

Several hundred professional quality prints were made as the “centerfold” for the Farabaugh book I published in 1990. I interviewed a lot of relatives for the identification boxes. I remember taking it down to Phil Farabaugh who lived next to Chick Yahner’s garage in Loretto. I figured he was seated as the boy, third one in from the lower left. Old Phil looked at it slowly, carefully, looked up and told me he couldn’t tell if it was him or not. If he couldn’t recognize himself, who could? That’s when I knew I was never going to be able to solve the identity of all these Farabaughs. I have a mounted print in my law office, and it always gets comments. One office worker marveled that they could start their own town. Indeed.

And here is our photographer Michael, in later life. . . 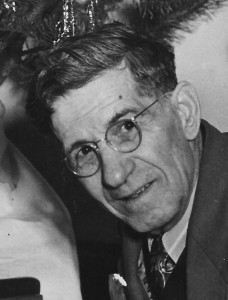