I started charting the Farabaugh family when I was twelve years old. At that age, my Farabaugh relatives were like a jigsaw puzzle no one could solve. There were Farabaughs everywhere, and everyone was a little hazy on the relationships at the yearly reunion at Duman’s Dam. At that impressionable age, I was also drawn to the mystery of a personal past. There were distant ancestors long forgotten, and a book could give them new life. Shortly after I started charting my cousins, I received a letter of encouragement from my great-great-uncle, Dr. Charley Farabaugh: 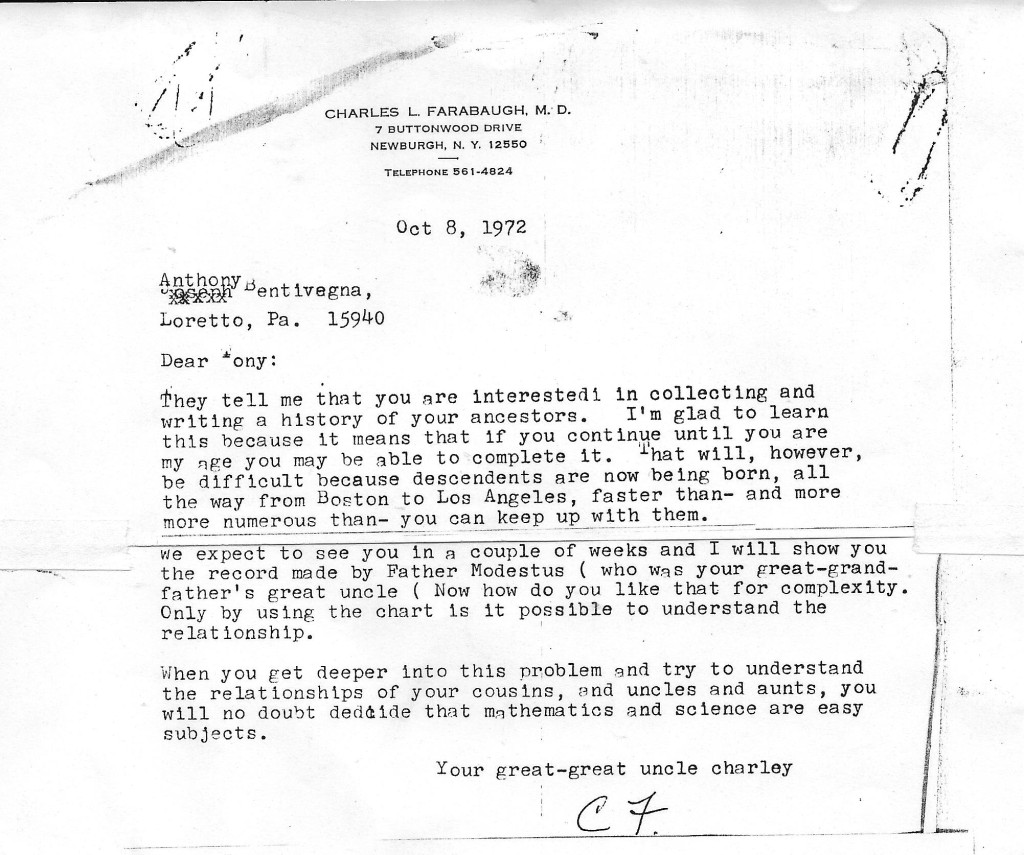 Uncle Charley was a close friend of my father. They exchanged many letters and had detailed discussions about local history over the years. Despite Charley’s encouragement, I unfortunately did not get to know him very well before his death in 1976. He left us all his materials on the family history, however.

Charley had quite a collection. In piecing together the information, it became clear that the history had been handed down several generations. The chart described in his letter was typed by Fr. Modestus Wirtner, O.S.B. (1861-1948), and was based primarily on the records of St. Benedict’s Church in Carrolltown, Pa. He typed it on the back of odd bits of stationery, the most recent of which is a 1928 advertisement from the Denning Manufacturing Co., of Cleveland, manufacturers of church pew hat holders. I also discovered letters from Joseph Koessler, the Ratschriber (town clerk) of Kappel-am-Rhein, Germany. Charley’s older brother Michael (1878-1959) wrote an open letter to Trier, Germany, thinking that the family originated from that town (probably due to an erroneous reference to Farabaugh origins in Gable’s History of Cambria County, explained in the Kappel link for this site). The letter somehow ended up in Mr. Koessler’s hands, who did some research and learned that they were ninth cousins. Joseph prepared an ahnantafel, and sent it to Michael showing the relationship. The document is signed by Joseph, “which has written the letter to you.” After Michael passed on, Uncle Charley corresponded with him; and then I exchanged letters with Mr. Koessler after Charley’s death.

Uncle Charley’s somewhat haphazard collection left too many unanswered questions, and I started my own research. The genealogy is unusual because every fact is documented (although the thousands of notes are proprietary and are not published here). I could not track and verify every past and present relative – but the 1990 book had 7200 relatives and was more thorough than anyone thought possible. It was a painstaking process through high school, college, law school and foggy nights in San Francisco. I only regret that I could not complete it in time for some of my favorite relatives. Dick Farabaugh, Charley’s younger brother, wanted badly to see it before he died. My great aunt Helen Veneskey, who admonished me to “get to know” my relatives while collecting data, was a particular favorite. And I often wonder if Charley had imagined such a finished product or now the world of internet access.

The original Fehrenbacher name means “one who lives by a distant tributary,” probably a reference to Rhine River. But those looking for high drama in the history of the immigrant Farabaughs may be disappointed. They were mostly stern, hard-working farmers and stone masons, who collectively played a major role in settling northern Cambria County. Augustine came first, in 1833. He arrived in Baltimore hoping to acquire farmland and make a living from maple tree syrup. He and the other immigrants were, above all things, devout Catholics. The most famous descendant is the steel magnate, Charles Schwab. Joseph Farabaugh (father to Michael, Charley and Dick all mentioned above) was an important farmer and photographer. Among the many war veterans, there was our lone Civil War casualty Bernard Farabaugh and Walter, from WW I. Catherine Bender (wife of E.P.) and Posey Yahner (wife of Congressman Paul) were matriarchs of large area farms. Georgia Farabaugh was a dynamic politician and mayor of Pueblo, Colorado. And there is the mystery of William C. Farabaugh, “the one who froze.”

The original book was organized in a raw text format, in a family unit system I devised. The 500 copies eventually sold out over a ten year period – one relative was actually just 15 minutes late in trying to acquire the last available copy. Now, into the new millennium, I am attempting to connect relatives with more modern means. The book was published at a time when there was little concern over identity theft. It did spawn a flood of new information and over the course of years I created a database that added quite a bit of new information. For the purposes of this website, it is necessary to filter the updated family tree to exclude certain information of living relatives, even though such information is almost certainly available through other means. The fragmented family card format is also selected to minimize the opportunity to effectively collect information that might be considered private. Relatives are nonetheless encouraged to provide me with full names, birth dates, marriage dates, occupational profiles , etc., so that newer generations can be fully included in the family archives. The current filter will remain in place and any additional requests to withhold certain information from the subjects will be honored.

It is impossible to thank the many people for their contributions to this study, both before and after the book publication in 1990. My grandmother, Naomi Bender, helped me sort out the immediate families; Mary Mangus and Lucy Mock of Loretto contributed most of the early photographs; Cecelia Farabaugh allowed for the incorporation of her 1979 publication; Ray Cassidy of Johnstown assisted with other major branches. More recently, Kane Farabaugh has become a major impetus to dig deeper into our German roots and get our family online.

It must seem odd that an Italian-American named Bentivegna would write a history on his German grandmother’s maiden name. Not if you knew my parents. My father liked to blast Swiss Army marching songs on Sunday mornings. My German-Irish mother was a college Spanish teacher. I inherited an appreciation for all cultures, and this study would not have been possible without their love and support over the years. It is their inspiration that continues to make me wonder about these ancestors of Kappel-am-Rhein, who were looking at the river, but thinking of the sea.