I haven’t posted anything in a few months, and we have some new subscribers! Welcome to my site dedicated to Farabaugh history. Past newsletters are under the Forum tab and has mostly my random essays on the more interesting folks in our bloodline. But the heart and soul of the site is the light green Tree tab, where the extensive family lineage is laid out. I wrote a book on the family back in 1990, which included about 7200 souls. The Tree at this site has 9751 descendants of six immigrants, and counting. Those six immigrants (five siblings from Kappel, Germany, and one immigrant from nearby Schuteral) came to the area of Carrolltown, Pa., beginning in 1833. They are: 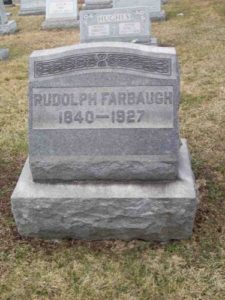 But wait, now there’s more. We have the discovery of Rudolph “Farbaugh” (1840-1927). He immigrated in the late 1860s and had a meat market at 1810 8th Avenue, Altoona, Pa. In 1893, he innocently bought some stolen cattle from a Mr. McGonigle, butchered it and sold the meat. McGonigle was apprehended and jailed when he returned to the Farbaugh meat market and tried to sell more of the stolen cattle. (Cambria Freeman, 22 Sep 1893). Rudolph here escaped notice in our family history because there are no male descendants to carry on the family name. I haven’t figured out where he came from in Germany. There is another straggler, Godfrey Fahrbach (1820-1909), an early settler of Hollidaysburg (along with Philip, likely a brother). Godfrey had a son and grandson who also took on the cognate “Farbaugh,” but so far it looks like no other males carried the name forward. Godfrey was a Lutheran, so he doesn’t count anyway. Just kidding. My wife was raised Lutheran and we get along just fine. I decided to keep her in the family tree, so we’ll find a place for good old Godfrey as well. 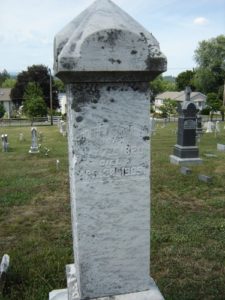