Andy Farabaugh (1881-1952) was the nephew of steel magnate Charles Schwab and also the accomplished physician, Lawrence Flick. When Schwab was establishing Bethlehem Steel, young Andy moved in and attended Lehigh University. While there he became one of Lehigh’s greatest athletes, lettering in 5 sports. In 1902 and 1903, he was captain and the centerpiece of a  football team that twice beat arch-rivals Lafayette. The Lehigh-Lafayette rivalry is the longest running contest in all of college football. For the 1902 season, the rivalry was stoked when Lehigh lured away coach Samuel B. Newton from Lafayette. With Andy at left halfback and his brother Louis Farabaugh (1878-1958) at quarterback, the Lehigh squad posted records of 7-3-1 and 9-2-1 and won all of the home games. Nearly all the losses were at Ivy League schools, controversial games that were commonly rigged. Lehigh’s campaigns in those two years were nonetheless remarkable. The program was mediocre both before and after the Farabaugh brothers took over.

Collegiate football in the eastern states was essentially the professional level at the time. Touchdowns were 5 points. The passing and kicking were erratic, and the game was far more brutal than today’s NFL. During the 1902 season alone, there were 14 fatalities, and there on the long list of reported injuries was a broken knee cap by Andy Farabaugh.  Washington Times (Wash., D.C.), 1 Dec 1902, “Gridiron’s Victims Number Fourteen Dead.” All the major newspapers carried detailed accounts of the games, which fortunately allows us to track just how great Andy performed. A chart of his successes is at the end of this post. 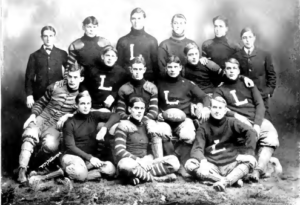 In baseball, Andy pitched the first game at the University of Virginia’s new athletic field in 1902, losing after relinquishing a 3 run lead in the 9th inning. He also pitched an entire 26-1 game loss at Harvard. After his collegiate career, Andy reportedly played with professional teams on a few occasions but did not give it full attention.

His life after Lehigh was tumultuous. In 1904, Andy was involved in an altercation in Allentown with a Mr. John Gosheen over a girl, in which Gosheen was seriously injured and Farabaugh placed under arrest by park guards. Andy was clubbed on the scalp but then escaped the guards by jumping off a trolley and eluding three shots fired at him. He was charged with aggravated assault and battery by Gosheen but acquitted by a jury vote of 11-1, with the civil damages case still pending in Easton, Pa. Later that year, he became gravely ill from typhoid fever and was hospitalized in Providence, R.I., for several weeks.

Andy became an engineer with Bethlehem Steel and other steel companies, and settled in Johnstown, Pa. He evidently worked one year as a mining engineer in Mexico, and in 1910, supervised steel production for Charles Schwab in Europe. His privileged status among the Schwabs finds him in the news travelling quite a bit. When drafted for WWI in 1918, his draft registration card indicated that he was a Superintendent at the blast furnace for Cambria Steel Co., in Johnstown, Pa., living at the Ft. Stanwix Hotel with his wife Vera. (Vera died of breast cancer in 1935). Andy apparently remained Superintendent for most of his adult working life that followed.

A 1942 registration card for WWII indicated that at the age of 61 Andy was not employed and living at 431 Lincoln St., Johnstown, and that he had an operation for pleurisy that resulted in a left side incision. At the time of his death in 1952 from arteriosclerosis, Andy was living alone in Altoona.

Andrew was perhaps the greatest athlete in the Farabaugh family bloodline, although I may be overlooking another candidate. There are the collegiate wrestling careers of Rob and Dave Yahner.  While at the University of Pittsburgh at Johnstown in the 1980s, each placed 4th in the NCAA II wrestling tournament. Dave came very close to winning the national title in 1989, losing in OT to the eventual champion. He was a teammate of the great Carlton Haselrig.

But let’s reach back in time and give Andy his due. Here is a compilation of his game accomplishments: