Seasons Greetings from Carrolltown, Pa., in about 1950. Here we have Michael J. Farabaugh (1878-1959) celebrating Christmas with his second wife, Maude (1895-1976). Michael was a farmer, photographer, town mayor, Justice of the Peace, and bred prize-winning beagles. He played some clarinet, not very well. He was known and loved by all in the Carrolltown area, including his 17 children.

The union to Maude was a minor controversy at the time. Mike’s first wife Bernetta died in May of 1917 of exhaustion. That’s what her death certificate says. The underlying cause was infection from the unsuccessful delivery of her 8th child. Maude was a foster child, raised by Peter and Catherine Noel. She was a young woman who helped Mike, who was 17 years older, at the photo studio. They had a child inside a year after Bernetta’s death, and this seemed a bit too quick for the first family. They weren’t married in the church until 1949, long after the children were born, which is surprising given the community. However, the two families got along great over time. Here is a 1982 reunion with the children of Bernetta seated and the children of Maude standing:

The Michael Farabaugh descendants had huge reunions every August, usually in Patton or Duman’s Dam near Nicktown. And since many of them started large families of their own, there were also lots of busy Christmas celebrations. Michael himself was quite involved in family functions, and toward the end of his life pursued some of the family history. His 1958 letter below to family is a charming read, ending with the words, “God love you all.” It was a good choice of words for any season (click to focus). 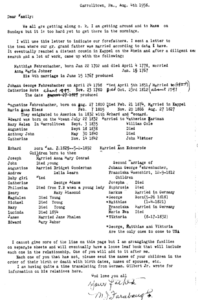 One thought on “Merry Christmas, From Mike and Maude”