We have several new subscribers to the website – welcome! The crack staff here at farabaugh.org has been diligently uploading massive family updates. If you spot errors or omissions, please email me at novatony@verizon.net. I really want to get a lot more pictures up too. I try to send out a new post the first of each month. To see the old ones go the tab named FORUM. I haven’t figured out a way to archive them yet or to have an obvious way for visitors to write in.

May 1st is supposedly a romantic day, a time for Spring thoughts, leaping about, chasing butterflies or attending a coronation. Out of curiosity, I ran the date through my whiz bang search engines to see what Farabaugh relatives got married on May 1st. I expected to find a number of incurable young and hopeful romantics, full of wide-eyed enthusiasm for what lies ahead. I expected my archives to produce elaborate wedding gowns, beautifully radiant brides, and rows of colorful matching bridesmaids offset by rows of handsome, tuxedoed gentlemen, arranged by height.

Instead, all I got was a blurry picture taken in Atlantic City: 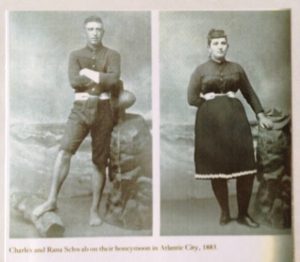 Yes, this is our most famous and successful relative, Charles M. Schwab, son of John and Pauline (Farabaugh) Schwab. He is on his honeymoon following his marriage to Rana Dinkey on May 1, 1883. At this point in time, Charlie was a rising star at the Edgar Thomson works near Pittsburgh. This picture is taken before his meteoric ascent with Andrew Carnegie, his presidency of U.S. Steel and his succession to Bethlehem Steel. They may not seem to be the most likely couple to go out a-May-ing, but who knows?  What is known is that the marriage did not produce any children and Rana rarely accompanied Charlie anywhere. She mostly remained in the mansions, was uncomfortable with her looks and even tried to stop any celebration of their 50th Anniversary. Her relationship with Pauline Farabaugh Schwab, her mother-in-law, was initially poor. Pauline as a devout Catholic disapproved of her son marrying a Presbyterian. But the two women rarely saw each other. Rana did send Pauline elaborate jigsaw puzzles, a pastime they both enjoyed, and no real strife is evident over the years. Robert Hessen, Steel Titan (Oxford Univ. Press, N.Y., 1975), pp. 17-19, 119-22, 139, 285, 290-93. I do recommend Hessen’s book. For the impatient, you can read more about this luminary at the Wikipedia page. He is not related to the modern day Charles R. Schwab who runs the investment conglomerate.

Charlie was a man of many talents and his legacy still holds a spell over Loretto, Pa., the town of his youth and mine. He had a deep interest in the arts and was, in his way, a philanthropist. But he was also a ruthless industrialist by day, and may have played some role in putting down the infamous Homestead strikes of the 1880s and 1890s. The last of these was unsuccessful and bloody; it set back unions everywhere for decades. Charlie also had some low key scandals that usually attach to wealth, as he moved among all the celebrities of his era. He was for example embroiled in serious charges in misrepresenting production for armor plate contracts, and later there were claims that he improperly profited from more government contracts during WWI. But his business reputation remained impeccable among those who mattered. He was truly a self taught and a self made man. He worked very hard to get to the top of the steel industry. He ultimately lost his wealth in the Great Depression and the final accounting of his estate was in the red.

This was all long after the honeymoon shown here, when Charlie showed his playful side at the beach. Cheer up, Rana! Happy Anniversary!

4 thoughts on “Around the Maypole With Charlie Schwab”