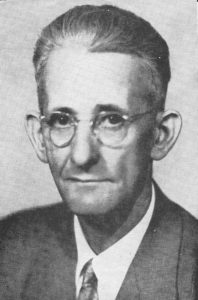 In June of 1952, Englebert Farabaugh (1890-1970) married Mary (Miller) Eckenrode. Englebert lost his first wife during a failed childbirth; Mary lost her first husband in a drowning accident at Clearfield Creek during the terrible area floods of 1936. They were, by all accounts, a serious no-nonsense couple. Englebert was part of the first full generation to have some formal education. Mary was a fixture in Loretto, Pa., for decades, succumbing in the year 2000 at the age of 106.

A few months after this marriage, Englebert was elected to the Pennsylvania House of Representatives. The election district was the rural part of the county north of Johnstown, and the most common surnames among voters would chiefly include. . . Farabaughs, Millers and Eckenrodes. There were 24 children between them, and those children had already married into other wildly prolific families such as the Benders, Hoovers, Scanlans, Conrads and Noels. I can’t find any evidence Englebert had to campaign. They were all Democrats and he probably just needed these relatives to show up on election day.

There is no easy way to research Englebert’s voting record online. But there is quite a bit of newspaper coverage throughout his six terms (12 years) at Harrisburg. To understand it, it helps to know that he was first and foremost a dairy farmer. Englebert’s farm was just outside of Loretto, along the “Dutch Road” to Chest Springs. It’s located just past and opposite the medieval style tower reservoir, and it’s still in the family. In the 1940’s and into the 50’s Englebert was active in a host of farming organizations, such as the Banner Grange, the Cambria County Farm Bureau Cooperative, the Interstate Milk Producers Cooperative, the Artificial Breeding Association, the Dairy Herd Improvement Association, and the Cambria County Agricultural Extension organization. When he went to the Assembly, he was already quite knowledgeable about farming and farming issues. From the accounts, he comes across as hard-working and principled. There are several items that are striking:

1. He tried to protect poor farmers. He was on most congressional committees related to farming, and little else. He co-sponsored a bill to finance the testing of cattle disease, and another to create a class of agents to test chickens for salmonella. He worked to have the Dept. of Agriculture well funded to regulate and inspect commercial grain feeds, and also empower the Department to approve any farm labor regulations. These measures were pursued in order to relieve farmers from the expenses involved and have a well-funded agency to provide aid as the need arose. They did not always pass. In his later years, he became deeply involved in the successful defense of fixing the price of milk, kept high in order to prevent small dairy farmers from losing out to larger enterprises. If you are interested in old political struggles over milk, you can see his commission report here. If not, I understand. At first blush, this appears to be self-interested. But this would be unfair. Englebert’s zeal to protect farmers actually went too far at times. He lashed out at a bill that prevented billboards near interstate highways, thinking it would deprive nearby farmers from advertising their products. “This is just a foot in the door for the state to control the land some farmer is trying to scratch a living out of,” he said. However, he seemed to have overlooked the bill’s exemptions for farmers and the 5-6 million a year in federal funding that passage would bring.

2. He fought taxation. Democrats used to fight taxation in Pennsylvania. Englebert voted against, and helped defeat in a dramatic post-midnight session, a bill in 1959 that proposed a state sales tax increase from 3 to 3.5%. When later efforts failed and the tax crept up to 4%, he sought to exclude “the propagation of domestic mink in captivity.” Not exactly sure what he was trying to accomplish, but my guess is that he was trying to help out the mink farm that was situated below the original Farabaugh homestead in Allegheny Township. It’s not a bad guess. Today, the base sales tax is 6%; where I live in California it’s a ghastly 9.25%. We could use a few Engleberts around here.

3. He generally opposed pay raises and government spending. When an Assembly bill proposed a $3K expense account and increased pensions for its members, Englebert’s criticism on the floor was widely reported. When he urged them to “search your consciences” he was accused of hunting for headlines. In leading the failed opposition, he pointed out that they really only work 27 days a year in session and warned: “I think it’s about time the members in both houses start thinking of the people they represent. . .and not thinking simply of financial gains. . . we’re going to call upon a lot of people to pay more taxes who are not making a good living.” The press noted that Englebert was heckled with inaudible comments during his speech.

Englebert railed unsuccessfully against a bill to increase the salaries of judges, noting that the $5k increase represented more than many Pennsylvanians make in a year. He voted in the majority against across-the-board pay raises for county officials. The second attempt to hike various state salaries (up to 25%) failed in the House by a vote of 75-105, and Englebert was an opposition leader. “This is just another of those unreasonable things we are asked to do at the expense of the taxpayers,” he told the press. Englebert also was among the House members to successfully vote down an unemployment compensation bill proposed by the governor. Sometimes he attacked small line items, and appeared myopic. In 1964, Englebert was ridiculed in an editorial when it was reported that he was one of only 3 who cast votes against a long-standing $300 budget item for road maintenance on the Cornplanter Indian Reservation. The columnist considered the objection frivolous, in light of the millions involved in other appropriation issues. Englebert was definitely a watchdog when it came to government spending.

4. Volunteer Fire Companies. When Englebert spotted a recurring budget item for Harrisburg’s volunteer fire company, he went on a mission to get money for the departments back home. Englebert sponsored a bill to give Cresson firemen $1000 for protection of the local sanatorium, which passed both Houses, but it was inexplicably vetoed by Gov. George Leader, a fellow Democrat. As an additional slight, Leader at the same time approved a $5000 a year measure for Harrisburg firemen. Englebert may have been outfoxed by allowing the bills to be separately considered – but he kept trying. In 1963, he sought $1000 in yearly appropriations for the Cresson and Ebensburg volunteer fire companies, again arguing that they were entitled to the same consideration as the Harrisburg department. This time, House Republicans voted it down. He did, however, co-sponsor a bill to fund $225,000 for the Ebensburg sewage treatment plant, which passed both houses unanimously.

5. Earl Farabaugh. Englebert never lost an election. One of his challengers over the years was Republican Earl Farabaugh, reported to be no relation. This was before farabaugh.org. They were, in fact, second cousins. Earl was a former coal miner who lived in Carrolltown. He lost at least three bids for the Assembly. In 1956, all three Democrats won re-election in the House. Engelbert led with 32,669; with Rovansek getting 31,521 and Lopresti getting 31,323. The closest of the three Republican challengers was Earl Farabaugh, who pulled in 26,385 votes.

6. The Failed Turnpike Extension. If you’ve ever been stuck behind a truck or at one of the many traffic lights trying to get to Pittsburgh on Route 22, know that Englebert tried to change this in 1955. He co-sponsored an unsuccessful bill to create a Turnpike extension at Somerset that would run through Cambria and other counties, in a northwesterly route that neared Pittsburgh and ended in Erie. The Assembly instead voted for highway improvements at the Delaware River. The congressmen in Philadelphia had a little more clout.

7. Taking Sodomy Seriously. Also in 1955, Englebert co-sponsored a bill that “[i]ncluded sodomy in the definition of first degree murder.” It did not pass.

8. JFK. In August of 1960, Englebert was among 30 Democrats chosen to meet with John F. Kennedy in Harrisburg in advance of his presidential campaign tour there. (Kennedy in fact packed the War Memorial in Johnstown that Fall). In the November elections, all four of the House Democrats from Cambria’s 22nd District were re-elected, including Englebert. The Dems retained control of the House and also took control of the state Senate for the first time in 22 years.

9. Dust Up With a Philadelphia Assemblyman. The 1959 general appropriations bill attempting to budget a $1.4 billion proposal required unusually long legislative sessions. Certain Assemblymen waned after a 9 hour session and Englebert was quoted as threatening to exercise a legal option to have them forcibly brought to the House. It was a maneuver that hadn’t been implemented since 1921.  “It touched off a debate at first humorous but gradually bitter, winding up with a complaint by a Philadelphia Democrat that the leadership [Englebert] was obstinate and stubborn in not recessing until Monday.” A Farabaugh who was both obstinate and stubborn? Really?

Englebert’s successor in the Assembly was the respected Master Farmer Paul J. Yahner, husband to Englebert’s niece Posie Farabaugh. Paul was known as a man of few words, but served from 1964 to 1980. Englebert eased into retirement. He was Mayor of Loretto for four years, which to him was “three years too many.” Growing up in Loretto, I knew several of Englebert’s children and grandchildren but never heard any discussion of his time in the Assembly. Perhaps he had a level of satisfaction knowing he helped to protect local farming interests. Perhaps he didn’t. I am told he built the altar at St. Michael’s Church that was used throughout the 1960s. Perhaps he thought that to be his most important accomplishment instead.

One thought on “Mr. Farabaugh Goes To Harrisburg”