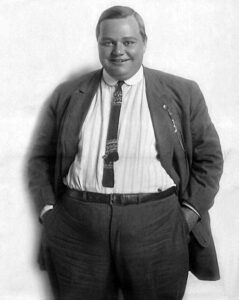 Roscoe Conklin Arbuckle (1887-1933), known as “Fatty” Arbuckle, was a early and famous silent film era actor, credited with mentoring Charlie Chaplin and discovering Buster Keaton. He is forever linked to a 1922 accusation of fatally injuring an aspiring actress during intimate relations. He was found innocent in three trials but his career never recovered. He married Addie Dukes in 1932. Addie’s daughter Marilynn married into the Farabaugh bloodline. 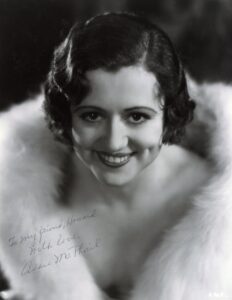 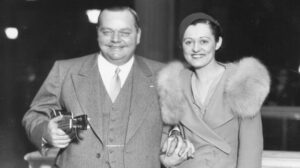 Addie Dukes, shown here in a publicity shot and with Fatty, appeared in several low-budget, obscure films and comedy series, when they became “talkies.” I believe she appears at the end of one of Fatty’s last comedy reels shown here.

Addie’s first husband Lindsay McPhail, below, was an accomplished musician and friend of Pres. William McKinley. Lindsay wrote devotional hymns but also had success in jazz, notably with the famous Paul Whiteman Orchestra. One of his fine compositions, featuring Bix Beiderbecke on trumpet, can be heard here 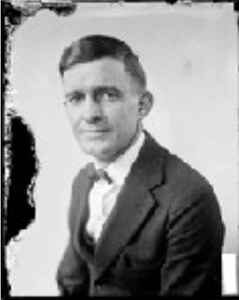 Marilyn McPhail was the only child of LIndsay and Addie. She bounced back and forth between Chicago and Los Angeles as her parents pursued success in movies and music. She met and married Robert Bair in 1955, in Los Angeles, and passed away in 2000. Robert and his Farabaugh ancestors all lived and died in Pa., with Robert being the only family member to move away, and to California. He passed away in 2010.