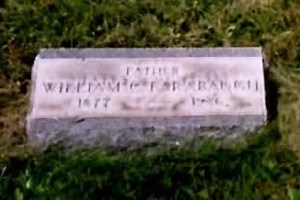 No. 2: In 1957, my great-grandfather Michael J. Farabaugh received a letter from a distant cousin, E.M. Farabaugh. The letter mentioned William C. Farabaugh (1877-1936)  as “the one that Froze [sic].” In my 1990 book, I didn’t have much else on him, so I left it at that. But thanks to whiz bang search engines I recently found a detailed account of poor William’s demise from the Indiana Evening Gazette, 3 Feb 1936 (click to focus and enlarge, it’s worth the effort): 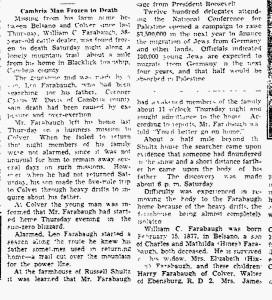 A tragic tale. I have a few hard questions for the Russell Shultz family, which refused to help when William appeared at the farmhouse during that sub-zero blizzard in 1936. William misjudged the conditions and must have lacked enough warm clothing to endure the walk from Colver, so why turn him away? Neither family were strangers to the area. William had lived there his entire life. In comparing the 1930 with the 1940 Census, we can see that Russell Shultz was established as a layout worker at the steel mill in Johnstown, with a wife Helen and a daughter Betty. On that night, Russell was 30 years old, and William was 58. Although the mystery of William’s fate is solved, the cold-hearted response of the Russell Shultz family is not.

We don’t have an image of William, but here is his son Leo, who at the age of 21 went on the frantic mission only to make the grim discovery.

The snows from the Winter of 1936 are still within the memory of some of the local old timers. At my Dad’s wake a few years ago, I remember them being described by Mr. Shuty of Lilly, Pa. (Dad had a lot of interesting friends from all walks of life). When the snows starting melting in March and were accompanied by three days of hard rain, the Johnstown Flood of 1936 resulted. Everyone knows about the 1889 Flood, but the 1936 Flood actually did more property damage. Who knows, maybe Mr. Shultz lost his job at the steel mill. It would serve him right.

One thought on “Spooky Farabaugh Mystery No. 2: The One That Froze”